Are Merseyside Police correctly determining whether their contractors fall inside or outside IR35? 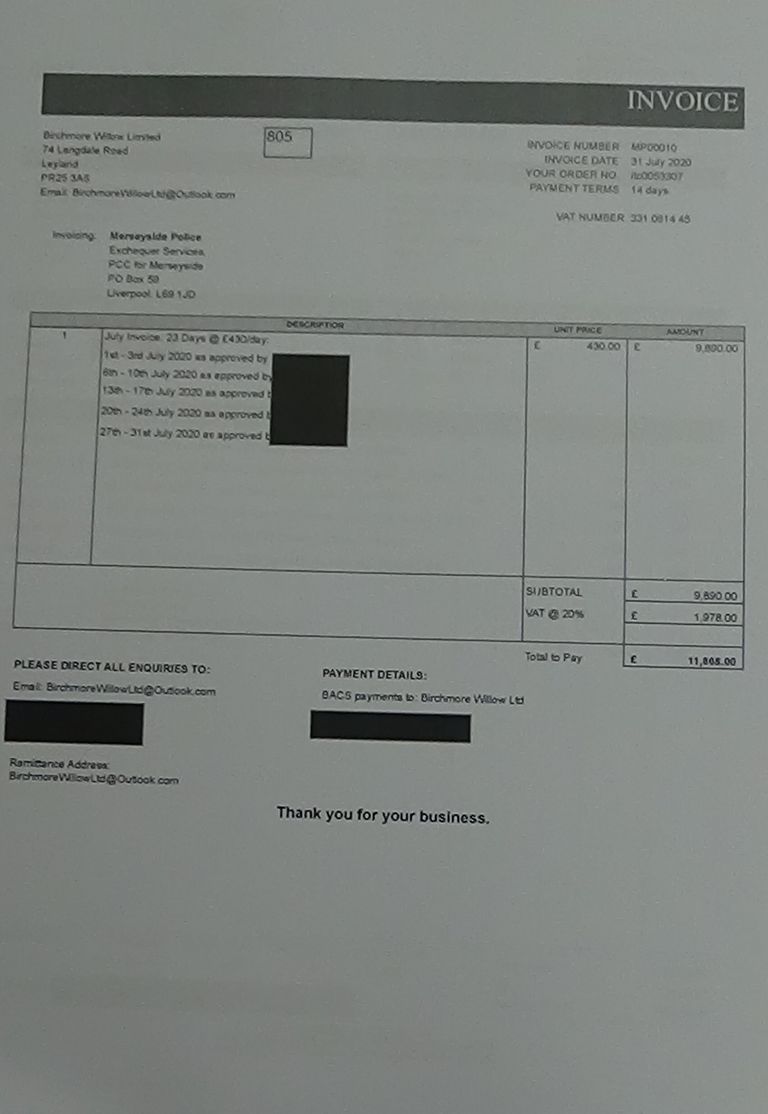 Are Merseyside Police correctly determining whether their contractors fall inside or outside IR35?

Below is one of those invoices (from Birchmore Willow Limited) who invoiced Merseyside Police at a day rate of £430 a day for 23 days of work carried out in July 2020 (which was for work on all working days in July 2020).


In total over the 2020-21 financial year, Merseyside Police paid a total of £133,364 (including VAT) in response to invoices from Birchmore Willow Limited. Merseyside Police state that this was for “specialist Information Technology and Communication (ICT) services as defined in the Contract Service Agreement relating to the Force ICT Programme”.

Starting in the 2017-18 financial year the off payroll rules (also known as IR35 or the intermediaries legislation) changed for public sector bodies (this tax reform included Merseyside Police). The Finance Act 2017 added an extra chapter to the Income Tax (Earnings and Pensions) Act 2002.

This had been in response to concern that contractors would set up a limited company to provide their services to a public body. The contractor (as owner of the limited company) could pay themselves in dividends. This arrangement would result in less overall tax being paid when compared to the contractor being an actual employee of the public body. The shares of Birchmore Willow Limited are wholly owned by one individual (the same person is also its only director), but this is not implying that the owner of Birchmore Willow Limited is paid this way.

As detailed previously on this blog I made an objection to Merseyside Police’s auditors Grant Thornton asking for a determination as to whether these payments to Birchmore Willow Limited (the objection also included payments made to other named companies made during the same financial year by Merseyside Police) were lawful. Grant Thornton had previously determined it as an eligible objection and I quote below from the decision section of their later letter below. This however is with the following three caveats:-

(i) I disagree with their decision,
(ii) Grant Thornton stated (in an earlier part of the same letter) that they didn’t seek legal advice on IR35 because of the costs it would involve (giving as one of multiple reasons that such costs of would fall on Merseyside Police) and
(iii) that Grant Thornton state that they just looked at a sample of the payments raised in the objection rather than all specific payments queried.

As disclosure of such a letter without the consent of the local auditor is a criminal offence, I’m pointing out that Grant Thornton have only agreed with disclosure of what is in their decision letter names are not included when I quote from it in this article.

The IR35 legislation is designed to ensure that workers who provide their services to a client through an intermediary but would be classed as an employee if they were contracted directly, are subject to deductions of Income Tax and employee National Insurance contributions that are paid over to HMRC by the employer.

IR35 rules apply to workers who are providing their services through their own limited company, otherwise known as a Personal Service Company or an intermediary. IR35 does not apply to self-employed contractors providing services to clients.

As a public authority, Merseyside Police is responsible for deciding whether off-payroll rules apply to contract workers providing services through an intermediary. If the off-payroll working rules apply, the fee-payer is responsible for deducting Income Tax and employee National Insurance contributions from payments made to the intermediary and paying employer National Insurance contributions.

In determining the applicability of IR35 there are a number of criteria. It is the responsibility of Merseyside Police to consider these and relevant contracts and case law in their determination of employment status. Three key criteria to consider are key are set out below:

In response to your objection, Merseyside police have provided their response to each of the items of expenditure you have referred to in your objection. This is included within Appendix I to the letter from xxxxx dated 20 September 2021 and in the revised Appendix I in the letter dated 28 September 2021. In this correspondence Merseyside Police have confirmed that there is a process in place to consider and assess IR35 implications and that they have subsequently reviewed each item, concluding that IR35 is not applicable other than in respect of agency spend where tax implications have been dealt with via the relevant supplier agency.

We have reviewed the responses provided by Merseyside police and, for a sample of items, gained an understanding of the nature of the expenditure through discussion with management and review of relevant documentation, giving consideration to the legislation and relevant guidance, including the key criteria noted above. Based on this proportionate review of expenditure items referred to in your objection, we have not identified any indication of breaches with regard to the application of IR35. We have established that Merseyside Police have processes in place to identify where potential arrangements exist and to ensure any potential liabilities to HMRC are captured and satisfied. Ultimately, however, it can only be for HMRC to determine whether or not IR35 has been applied correctly in each individual case, and as external auditors we cannot make binding decisions and our views are not determinative. With this in mind, we have not carried out a detailed review of every one of the cases which you included in your objection and nor did we seek legal advice; to do so would be disproportionate, given our role compared with that of HMRC.

Below are photos of the other 12 invoices from Birchmore Willow Limited to Merseyside Police relating to the 2020-21 financial year.