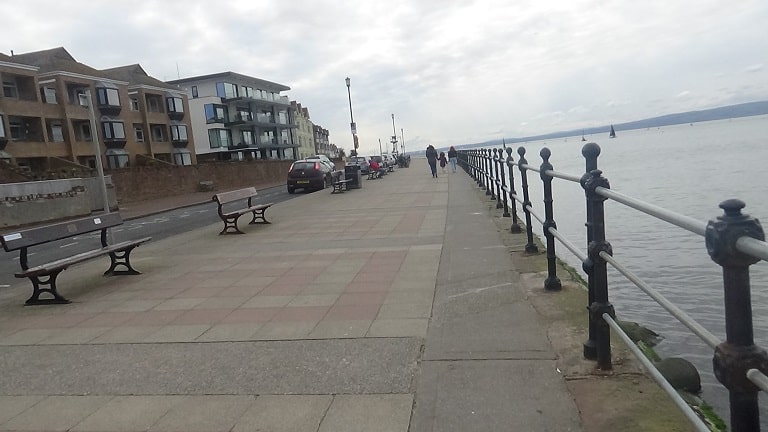 Wirral Council have further information about the West Kirby Flood Alleviation Scheme on their website.

There is currently (at the time of writing) an online petition of 1,375 people calling on Wirral Council to pursue other flood alleviation options.

John: OK, I’m here at West Kirby and I’m with Dawn who’s part of the Stop the West Kirby Sea Wall Campaign. Could you just tell me what the campaign’s about please?

Dawn: Good morning John, thank you for coming. We’re a small group, growing of residents and businesses and we’ve got grave concerns that the wall solution is not the right solution for West Kirby in terms of flood defence and what we’re asking for at the moment is for the Council to just pause on this project, reengage with the community and businesses, revisit some of the previous solutions that were maybe ruled out because of you know they were too expensive, now that this project has reached £9.7 million and we’re just asking for that pause and that reconsideration.

We feel that there’s an overarching issue here where residents are just not being listened to and we’ve urged councillors, council officers to come and engage with us and they haven’t wanted to come down here so we’re a bit worried that this is just going to get steamrollered through and a lot of people here on the front are very worried about that wall about the impact it will have on their wellbeing, the impact it will have on tourism in West Kirby and all we’re asking for is just that pause.

John: So what are your specific problems with the plans as they are at the moment?

Dawn: Well we’ve got concerns that the plan actually reduces the front width of the promenade by a third, so that pushes the number of people on the promenade into a much smaller space, that changes the aspect of it totally. The space behind the wall varies from between 1.2 and 1.7 metres and in between the length of access points at every 100 metres, there are also lamp posts in the way and we’re worried that that will impact on disabled access.

If people are unwell and can’t get out of their car, because the wall’s there, they won’t see anything and again, we’re concerned that that’s impacting on disabled and vulnerable users.

John: There’s quite an open view with just railings on that side so you can see all the way over to Wales.

John: How would that change if they put this…

Dawn: If you go and stand behind the wall and then imagine yourself sitting in the front seat of your car on South Parade there, then your view is impeded significantly.

John: Or the [West Kirby Marine] Lake as well.

Dawn: Or the Lake yeah, so we’re concerned that there’s a whole range of issues, at consultation we were only ever offered a wall. We were told all the other options had been rejected.

So many local people just don’t feel confident that this is the right solution.

John: I was told recently that the estimated price has gone up as well? Does that fall on Wirral Council, do you know?

Dawn: The price seems to increase week on week, every time you speak to somebody. The current capital borrowing for the public realm element of this project is £3.8 million as of last week, the capital, the grant aid from DEFRA [Department of Environment, Food and Rural Affairs] through the Environment Agency is £7.7 million and we feel at that kind of budget there must be other more agreeable options.

John: Have they put it out to contract yet?

Dawn: The contract is part of a decision process that we feel the Council are currently rushing, they need to make an agreement on the 11th of April to issue contracts on the 18th April because the window for this work is only the summer period, it needs to be finished by the end of September, beginning of October.

John: That’s something to do with bird nesting season?

John: But it’s already been through Planning Committee from what I remember,

John: and it’s already been through another Committee on Wirral Council.

Dawn: At planning the project had an objection online of 1,125 signatures, 190-ish objections on the online portal and 20 people in favour and it just feels like that overwhelming body of objection was ignored at planning. That was their opportunity to say well clearly this doesn’t have the level of engagement that is really required as part of the process.

John: And of course petitions only get 5 minutes at Planning Committee which doesn’t reflect the size of the petition and so whether it’s 25 or a thousand, unfortunately they get the same amount of time. So what are the next stages in your campaign? Are you just basically wanting them to delay…

Dawn: We want a delay,

Dawn: We fully understand that delaying anything will mean that this work won’t happen this year, what we feel is that we need that time. We’re told that the Environment Agency money will get taken off the table if the work doesn’t start and yet this project has been you know in planning since 2015 and every year the money will be there and some years the money seems to be doubled and tripled so we’ve asked for evidence that that actually is true, actual evidence that the Environment Agency money will be withdrawn, apparently withdrawn if they don’t go ahead now.

John: And of course there are elections coming up to Wirral Council as well in…

Dawn: For us this isn’t a political issue, this is about the future of West Kirby and securing the best possible flood defence option that residents and businesses are engaging with and regular users feel is the right solution. Many people who are in favour of the wall, feel that this wall isn’t high enough and isn’t long enough. So if that’s…

John: You can’t please everybody unfortunately…

Dawn: Then we do need to find, a more sustainable option. It’s on the question and answer of the Council portal, if this wall isn’t big enough is there a position to come back and make it higher and they’ve said yes and other amendments to South Parade. Why not let’s explore all of those now and let’s get the solution done once, that will be sustainable, rather than have to revisit it in some years time with more money or more concrete et cetera.

John: Because one of the reasons they gave behind it was sea level rises and climate change and the flooding that has happened in the past.

Dawn: We’re not doubting any of the science, you know that isn’t our expertise, but we’ve asked for key pieces of information, that effected the decisions at planning, one of them being the data and the methodology behind the risk to life claim and we were told it’s being reviewed and we’ve asked for the information, it’s not been shared and the best way to be, to proceed is to be open and transparent about everything that you’ve got.

John: So you don’t feel Wirral Council’s being open and transparent about the project or their plans? Sorry I’m putting words in your mouth there. Sorry, what’s your opinion on Wirral Council?

Dawn: I feel that the consultation from 2015 and 2019 were that long ago that a lot of local people thought that this wasn’t going ahead and only now when we’re doing this Say and See event are people going, “Oh that’s happening. When’s that happening? I didn’t know that.”

John: So you’re probably having more engagement with the public here than Wirral Council has?

Dawn: I would say that we have had more engagement and I think that’s another critical point, the Environment Agency require funders or bidders for funding to have a high level of community engagement and we’ve asked questions like, “What specific disability groups were invited to consultation to give their views on the disability access, the pedestrian footway, the pedestrians into the road…”

John: Does it narrow the roadway at all or does that stay the same?

Dawn: The road will be the same however there’ll be a cycle path on the other side of the road, …

John: So that will narrow it, yes?

John: So do the Victorian shelters get retained on their plans or not?

Dawn: There’s no detail about the Victorian, oh the Victorian shelters yes, one of them is supposed to be refurbished and come into that small triangle of space there.

John: Yeah, by the entrance to the car park for the Marine Lake?

Dawn: Yeah, not much of a view really is it to the car park of the Sailing Centre?

John: No, not really.

Dawn: And the other one is going to be refurbished down by the old baths. So there’s a plan to open out that space by where the old baths was.

John: Are they keeping these old lamp posts or are they changing them as well?

Dawn: I don’t know, a lot of them don’t work anyway so it would be great to see something that works down here.

John: Well thank you very much for your time.

John: And good luck with the campaign.

Dawn: Thank you very much.