Why is HMCTS causing a “vexing level of uncertainty”?

Why is HMCTS causing a “vexing level of uncertainty”?

Below is a copy of HMCTS’ response to my recent complaint, followed by my response. Just for information I made this complaint by email last year in response to a letter, then I recently followed it up over the lack of response. Refunds tend to come via Her Majesty’s Paymaster General and despite what it states in the response below a refund of nine pounds has not been received.
END_OF_DOCUMENT_TOKEN_TO_BE_REPLACED

Why am I redacting parts of court documents before publishing them?

Before I start with a blog post about how Wirral Council’s claim for a possession order for the land known as Fernbank Farm in Sandbrook Lane I am going to explain why I have redacted certain details from these documents before publishing them as well as the arguments for and against disclosing them without redactions. The general principles behind this I wrote about yesterday in Getting information about Fernbank Farm is made unusually difficult; what are they trying to hide?.

Attached to the particulars of claim is a map showing the land this case is about edged in red (although on the black and white photocopy I have it’s edged in black). Unfortunately the map is crown copyright and although Wirral Council have a licence to publish it I don’t, therefore the map and compass are blacked out from that document. I will however provide a description of where the land is and a link to a map. The title on the map lists it as being at Sandbrook Lane, Upton. Most people would regard it as being in Moreton, not Upton as it’s North of the M53 Junction 2 spur and the particulars of claim refer to it as being in Moreton.

To the documents that started the claim (the N5 form, particulars of claim and map) I have made two other redactions. The claim form itself has the home addresses of both defendants. However the request for a possession order does not relate to either of their home addresses, but to Fernbank Farm in Sandbrook Lane. During the fast track trial in February 2014 both defendants gave evidence from the witness stand and stated their home address in open court (at a public hearing) in front of about fifty people.

Personally I have no problem with my home address being in the public domain, as when you stand in an election it becomes public knowledge. My attitudes on privacy are therefore probably different to most of the population! Neither of the defendants are “public figures” and in my view therefore are entitled to a certain degree of privacy with such information. The case has nothing to do with their home addresses as it is to do purely with them being signatories to a lease with Wirral Council for Fernbank Farm.

Arguments in favour of disclosure of the defendant’s home addresses would be that these details have been given in open court and it would allow those reading this to contact them directly. However both have Facebook profiles, which can be used if people wish to contact them directly. If either Mrs Kane or Mrs Woodley are reading this and are happy with their home address/es being published my contact details are here.

Search engines cannot properly index or read scanned images, therefore the text of what is in these documents is included below it. As usual with images I post on this blog, a thumbnail is used and you can click on the thumbnail for a higher resolution image.

This is a link to the current (2014) blank version of the N5 claim form (for possession of property) which has minor changes to the 2013 version used by Wirral Council in their claim. 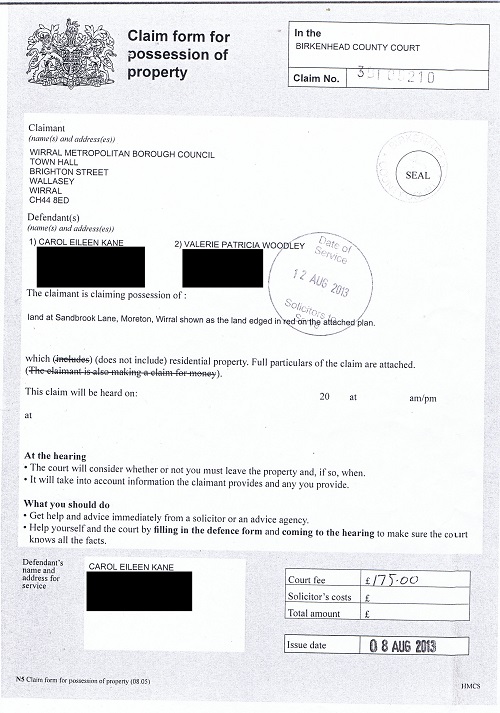 Claim Form for possession of property

land at Sandbrook Lane, Moreton, Wirral shown as the land edged in red on the attached plan.

which (includes) (does not include) residential property. Full particulars of the claim are attached.
(The Claimant is also making a claim for money).

What you should do

Getting information about Fernbank Farm is made unusually difficult; what are they trying to hide?

Getting information about Fernbank Farm is made unusually difficult; what are they trying to hide?

I went to Birkenhead County Court today to get copies of documents to do with Wirral Council’s request for a possession order in the Fernbank Farm case. What I had requested was a copy of the two judgements (the first one arising from the application hearing on the 21st November 2013 and the second one from the fast track trial from February this year). I also had requested the “statement of case” and was told by letter that copies of these documents would come to £10.

When I paid the £10 I was given a copy of court orders dated 17th February 2014 (the possession order) and a court order I wasn’t aware of (that had been made without a hearing) on the 29th November 2013. I queried whether this was the one I’d asked for as the date was incorrect, but the member of staff insisted it was the right one (even though it wasn’t). I was also given a copy of the original particulars of claim (which had been attached to the claim form). This came to six pages in total.

I queried with the member of staff at the counter as to why the original claim form hadn’t been included, as the letter I had got in reply from the Court stated that a District Judge had agreed that I was entitled to a copy of the court orders and the statement of case (which I am entitled to under Civil Procedure Rule 5.4C). She insisted that the “statement of case” was just the particulars of claim and that I wasn’t entitled to any more documents beyond that which I had already received. I asked her to check the definition in the Civil Procedure Rules but she refused to do so.

I was going to the University of Liverpool library anyway, so while I was there I looked up what “statement of case” actually means. It’s defined in Part 2.3 of the Civil Procedure Rules as
“statement of case –

(a) means a claim form, particulars of claim where these are not included in a claim form, defence, Part 20 claim, or reply to defence; and

(b) includes any further information given in relation to them voluntarily or by court order under rule 18.1;”

So I printed off a copy of this and returned to the Birkenhead County Court querying why statement of case had been interpreted as meaning just the particulars of claim (especially as the statement of truth for the particulars of claim was on the claim form). I also pointed out that the court order of the 29th November 2013 requested the Claimant (Wirral Council) to “include a chronology setting out all relevant dates relating to the granting of the lease, notices given and dates by when action pursuant thereto should have occurred”. I asked why a blank defence form had been included in the earlier six pages, but not the defence, reply to the defence or the information supplied in response to this court order?

The member of staff said that they [the staff] disagreed with my interpretation of “statement of case” and that they would have to ask a District Judge which was impossible to do at that time as the Judge or Judges were on a lunch break. We waited for about an hour until she went to find a Judge (who unsurprisingly agreed with what the previous Judge had told the person who wrote the letter) and when she came back she had to provide me with the documents that she had earlier that day insisted I wasn’t entitled to which were the original claim form, the defendant’s amended defence (submitted in triplicate so she charged me for three copies), an acknowledgement of service form, blank defence form and another copy of the same particulars of claim (but this time including a map).

As this now came to twenty-five pages (instead of the original six), she insisted on charging an extra £7.50. This was despite the fact that she had given me a copy (again) of the particulars of claim (a further three pages). She insisted the second copy was an amended particulars of claim (it wasn’t, it was identical), the only difference being that she had now included a page of a map of Fernbank Farm. She also provided the amended defence in triplicate (which was three pages so therefore giving me it in triplicate meant an extra six pages). I quibbled over being charged extra for pages I had already been supplied with, but in the end I just paid the £7.50 as I can claim this back from the Birkenhead County Court in the next 6 months (as well as the original £10) using an EX160 form.

Even if proceedings were active (as they were prior to the 17th February 2014), there is a caveat in s.5 of the Contempt of Court Act 1981 when it comes to “discussion of public affairs”. Section 5 states “A publication made as or as part of a discussion in good faith of public affairs or other matters of general public interest is not to be treated as a contempt of court under the strict liability rule if the risk of impediment or prejudice to particular legal proceedings is merely incidental to the discussion.”

There are no reporting restrictions in effect with regards to these proceedings and I am not subject to a court order preventing publication of these documents from the Birkenhead County Court. I therefore think that once again this member of staff has “got it wrong”. The Birkenhead County Court is subject to s. 6 of the Human Rights Act 1998 as it is “unlawful for a public authority to act in a way which is incompatible with a Convention right”. This includes article 10 which states:

1. Everyone has the right to freedom of expression. This right shall include freedom to hold opinions and to receive and impart information and ideas without interference by public authority and regardless of frontiers. This article shall not prevent States from requiring the licensing of broadcasting, television or cinema enterprises.

2. The exercise of these freedoms, since it carries with it duties and responsibilities, may be subject to such formalities, conditions, restrictions or penalties as are prescribed by law and are necessary in a democratic society, in the interests of national security, territorial integrity or public safety, for the prevention of disorder or crime, for the protection of health or morals, for the protection of the reputation or rights of others, for preventing the disclosure of information received in confidence, or for maintaining the authority and impartiality of the judiciary.

Therefore for the reasons above (that proceedings aren’t active and even if they were that what I’m going to publish falls under discussion of public affairs) and National Union of Journalist’s Code of Conduct rule 1 which states “At all times upholds and defends the principle of media freedom, the right of freedom of expression and the right of the public to be informed” I will be writing tomorrow have written at EXCLUSIVE: How Wirral Council’s court case to evict the Fernbank Farm tenants began on the 8th August 2013 about information I have found out from reading these documents.