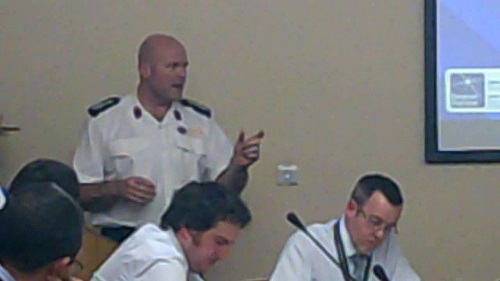 Dan Stephens, Chief Fire Officer for Merseyside Fire and Rescue Service gave a presentation to Wirral Council’s Regeneration and Environment Committee on his “least worst operational response options”. He explained that due to budget cuts, if they could get the land (and money from government) to build a new fire station in Greasby that this would lead to the closure of fire stations at West Kirby and Upton.

He described in detail the various options to save money instead of station mergers, which ranged from only crewing stations during the day to just having firefighters on call (which would lead to a further five-minute delay in responding to emergencies and less time for training).

Dan Stephens in his presentation said that on fire station closures “as much as this is a very unpalatable option it may be inevitable especially in light of forecasted cuts until 2020”. During his presentation at each point he mentioned cuts to the fire service’s budget by the government Cllr Harry Smith (who wasn’t on the committee but just there to watch) heckled with a loud one word heckle of “criminal”.

The Chief Fire Officer was then asked by the Chair about the likelihood of getting capital funding for a new fire station at Greasby. Dan Stephens answered that Merseyside Fire and Rescue Service would be bidding for the money along with other fire authorities, however the bids would be judged on projected efficiencies.

On Cllr Foulkes’ other question he said that after World War II, the fire service moved from central government control to the control of local authorities. At this time they set national standards of fire cover. In the 1950s there had been lots of heavy industry on Merseyside for example docks. Call outs to industrial areas required a response of two fire engines within five minutes and one within eight minutes. The Merseyside Fire and Rescue Service was therefore designed to combat the risk that existed back in the 1950s. The Merseyside population in the 1950s was 1.7 million, now was only 1.385 million.

In 2004 the old Fire Service Act was repealed and the standards of fire cover went too. Population based funding came in, which made Merseyside very expensive per a head of population. Although Merseyside got extra funding based on deprivation this didn’t totally offset the loss of funding.

Cllr Brian Kenny (not a member of the committee but Cabinet Member for Environment and Sustainability) thanked Dan Stephens and asked when they would make final decisions on the cuts. Dan Stephens answered that the Merseyside Fire and Rescue Authority would set its 2014/15 budget at its budget meeting on the 22nd February 2014. He explained that although the changes to Wirral’s fire stations wouldn’t happen until 2015/16 that they needed to start now on implementation as it would take between eighteen months and two years to build a new fire station. Dan Stephens said that they needed to look into whether they could secure land in Greasby, once this was established they would go to public consultation.

The Chief Fire Officer estimated that they would know within three months whether they would be able to buy the land for a new fire station in Greasby. After public consultation if a decision was made to go ahead, then it would take a year to build a new station. He said that they were working with Wirral Council to try to secure land.

Cllr David Elderton said that if the two fire stations at Upton and West Kirby were merged at Greasby that he was concerned about the effect on response times to call outs to Hoylake. Dan Stephens said that “Greasby is the best operational location” and explained how some of the alternatives to a merger would also impact response times.

Cllr Steve Foulkes asked what the impact of the cuts would be on fire prevention such as fitting free smoke alarms. Dan Stephens said they had cut ninety jobs which included those in advocacy roles. He explained that with agreement with the Fire Brigade Union that they had changed shift patterns. The savings from this offset the total savings they needed to make. He said they would maximise the amount of time they could spend on fire prevention but that there would still be cuts to this area.