Who are the 83 candidates in the 2014 election for 8 Members of the European Parliament for North West England?

Who are the 83 candidates in the 2014 election for 8 Members of the European Parliament for North West England? 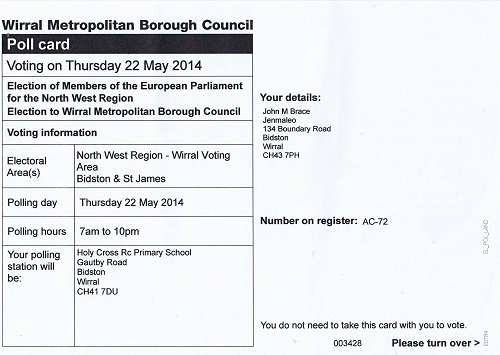 The voting system at the European elections is different to the local elections. In the European elections eleven political parties (An Independence from Europe, British National Party, Conservative Party, English Democrats, Green Party, Labour Party, Liberal Democrats, No2EU, Pirate Party UK, Socialist Equality Party and UK Independence Party (UKIP)) have each nominated a list of candidates. Each political party has put forward a list of eight candidates apart from the Pirate Party UK which has only put forward three.

People vote for a political party and once the polls close the total votes for each party are added up. The party with the highest number of votes is given the first Member of the European Parliament seat. You can read an explanation of how the voting system decides on who gets the other seven seats here. The voting system is a proportional representation system. This means the seats for Members of the European Parliament depend on what each party’s share of the vote is.