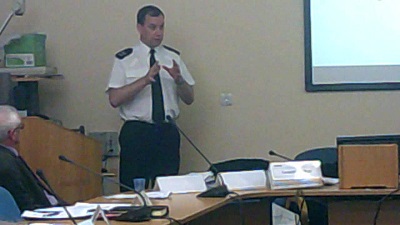 Merseyside Police’s Sergeant Barrigan addressed councillors on Wirral Council’s Licensing Act 2003 Committee calling for a change to their licensing policy. He told councillors about concerns raised about alcohol related antisocial behaviour in the Charing Cross area of Birkenhead and showed those present maps of street drinking reported to Merseyside Police between the 1st April 2012 and the 1st March 2013. These reports were clustered around the Charing Cross area of Birkenhead.

He also showed a map of crimes reported between November 2012 and October 2013 in this area and said that 52% had taken place on licensed premises and referring to areas of Liverpool which already had four areas covered special cumulative impact policies.

Sgt Barrigan quoted statistics on how alcohol was a reason in a high proportion of the theft offences in that area. Street drinkers were a problem in the area with people drinking on the streets for reasons such as an inability to afford heating or to avoid being evicted. The street drinking was connected to a high number of off-licences in the area. In answer to a councillor’s question he said that the boundaries of the area he wanted covered by the special cumulative impact policy would cover both sides of the road on the boundary. He asked if councillors had any questions?

Cllr Tony Norbury said he was concerned that it might move the problem to outside the area covered by the special cumulative impact policy. A Council officer said that they would consult on the new policy and if the committee then agreed to amend the guidance then it would be kept under review.

A special cumulative impact policy (if agreed following consultation) in the Charing Cross Area of Birkenhead would mean that there would be a special policy of rebuttal regarding licence applications in this area. This would mean that applications in that area that were likely to add to the existing problems would be refused or subject to limitations (but only if relevant representations had been made).