What were Cllr Liam Robinson’s answers to 2 questions about vandalism to bus stops and bus shelters in Merseyside?

What were Cllr Liam Robinson’s answers to 2 questions about vandalism to bus stops and bus shelters in Merseyside?

On Thursday afternoon, the councillors on the Transport Committee of the Liverpool City Region Combined Authority had a public meeting. As I was still on my way back from Merseyside Fire and Rescue Headquarters to Liverpool City Centre following a public meeting of the Merseyside Fire and Rescue Authority, my two questions about vandalism involving bus stops and bus shelters were asked in my absence by Louise Outram.
END_OF_DOCUMENT_TOKEN_TO_BE_REPLACED

Councillor Pat Cleary (Green Party for Birkenhead and Tranmere ward) writes on his blog about a current consultation by Wirral Council proposing changes to Hamilton Square and the surrounding area.

If agreed the changes (you can view a plan of the proposals on the Wirral Green Party’s website it would mean:

The deadline to respond to this consultation is Friday 13th November 2015.

You can respond to the consultation online by visiting this link to Wirral Council’s website (then click on “Comments and objections about new traffic schemes“).

Then enter your contact details and email address (twice).

The Scheme name/details to enter on the next page are “Hamilton Square re-design“.

If you wish to do both select All of the above and enter your comments and objections separately.

There was a drop in session on Tuesday November 10th 2015 at Birkenhead Town Hall, Hamilton St, Birkenhead CH41 5EU, between 3pm and 7pm so people could view the plans.

As regular readers of the Bidston & St. James Focus know, Merseytravel recently responded to a campaign we ran (on behalf of local residents of Beechwood) for extra bus stops on Hoylake Road near the Wirral Tennis & Sports Centre.

The one on the North side of Hoylake Road (opposite Compton Road) is fine and buses are stopping at it. Both stops now have timetables in too.

At the end of June I met with a representative of Merseytravel and Wirral Council on site. There was some concern about the effect of parking and traffic from Compton Road. However since a road of houses off Compton Road was demolished to make a park for Bidston Rise there’s been much less traffic coming into and out of Compton Road (which is short and only has houses one side). Both Merseytravel and Wirral Council agreed there would be no road safety issues as long as the bus stop didn’t obscure a drive on Hoylake or affect sight lines. At this point (a few yards from a set of traffic lights the traffic would be moving slowly anyway).

The bus would be fine stopping on the double yellow lines here and the no loading sign wouldn’t apply to a bus.

However a local resident recently stopped me in the street and told me that Arriva buses were not stopping at the Hoylake Road/Compton Road stop on the South side of Hoylake Road.

Originally Merseytravel had planned to put this stop further along Hoylake Road, but the resident outside whose house it’d be objected on grounds of parking and privacy. So instead it was sited nearer to the double yellow lines/no loading at Compton Road/Hoylake Road.

The resident said she had tried to get off Arriva buses at this stop, but they wouldn’t let her on/off, with the driver insisting it wasn’t a stop. However other operators such as Avon that use this route were stopping here. This sounded odd to me, so I wrote to Arriva.

Back in July all operators on the route (including Arriva) were written to about the proposed pair of new bus stops. This is what the Managing Director of Arriva wrote on the 16th July 2010 (before the bus stop was put in):-

“Should existing bus stops be moved, Mr. Finnie would be more than happy to continue using these to aid access to the Tesco store for our customers. However, this would have to be fully risk assessed to ensure that these stops could be used safely”

Bear in mind the existing bus stops weren’t moved, but new ones were added! A risk assessment was done by Wirral Council.

Arriva wrote to me again in a letter dated 23rd February 2011. In this they quote “The manager of Birkenhead depot has investigated and advised the following. Our drivers have been instructed not to serve this stop until we have carried out a full safety assessment on it. We apologise for any inconvenience this may be causing, but it is essential for the safety of our passengers, our drivers and other road users that this is completed before it is used. The stop will then be served once we have registered this additional stop with the Local Authority as we are required to do so.”

So, to summarise Arriva won’t stop their buses at a new bus stop which has been in place for 5 months. It’s already been risk assessed by Wirral Council and Merseytravel and been found to be a suitable site for a bus stop. The timetable insert (provided by Merseytravel) gives people the impression the Arriva services stop here. Today I took some photos of the stop and recorded a video to try and explain to Arriva (and the public) why they aren’t stopping here!

Hopefully Arriva will have some common sense in the near future and/or carry out their “full safety assessment”. I’ll be writing to Simon Finnie, the General Manager at Birkenhead (and back to Steven Hill) and taking him up on the offer of a site visit and Merseytravel if they wish to come. 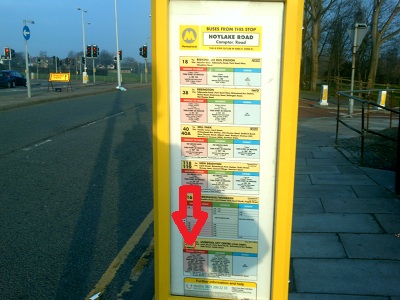 I did make a one minute video of myself at the bus stop explaining the above, but the traffic seems to have drowned me out! When out this morning, I did bump into the resident who seemed pleased that someone was taking an interest in the problem. However she was walking someone to school and couldn’t chat long.

When I clear up the audio (or dub over it) I’ll post it on this blog. On a point of local history, when I was a teenager the secondary school used to play hockey on the astroturf pitches at Wirral Tennis & Sports Centre in the Winter and Spring term. As the school day finished at the Wirral Tennis & Sports Centre we were expected to make our own way back home as the school minibus only took a few back to the school gates (the school minibus took twelve, but about a hundred boys in my year did sports here each week arriving in a coach). In 1994-1996 I could have done with these extra bus stops (especially in the cold Winter!) as it would’ve saved me a few minutes walk after the slog up the steep hill with sports gear from the sports centre.

However, the main reason behind these stops is to help Beechwood residents who visit Tesco by bus to shop. These extra stops save about 3 minutes walk along Hoylake Road (which with heavy bags of shopping can be tiring for the elderly or disabled).