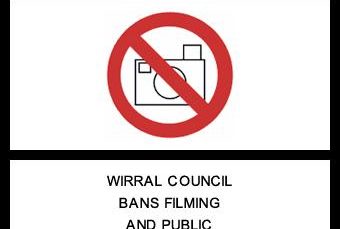 I have requested from Wirral Council to re-use video footage of their recent public meeting of councillors where the subject of Kingdom came up. Despite their policy on filming suggesting that we should allow re-use when filming them, they are concerned about the possibility of “edited extracts” (even though I asked not for edited extracts but to republish footage of the whole meeting) and it appears that the answer to the question about re-use at the moment is no.
END_OF_DOCUMENT_TOKEN_TO_BE_REPLACED

Earlier this month I wrote a story about what happened when I tried to film a public meeting of the Birkenhead Constituency Committee headlined Why does Wirral Council believe it can direct how filming of its public meetings are done (when not filmed by themselves)?
END_OF_DOCUMENT_TOKEN_TO_BE_REPLACED

Since a legal change in August 2014, I have filmed eleven public meetings of Wirral Council’s Birkenhead Constituency Committee with no problems.

The press release issued by the Ministry of Housing, Communities and Local Government in 2014 can be read at that link.

The 2014 legal change contained in the Openness of Local Government Bodies Regulations 2014 amended both the Local Government Act 1972 and Public Bodies (Admission to Meetings) Act 1960 (both of which had previously given a power to Wirral Council to stop filming at public meetings).
END_OF_DOCUMENT_TOKEN_TO_BE_REPLACED

I’ll declare at the outset that I regularly film public meetings of Wirral Council.

Wirral Council’s Standards and Constitutional Oversight Committee next meets on the 27th February 2018 starting at 4.00 pm in Committee Room 3 at Wallasey Town Hall.

The planned changes involve each time Wirral Council films the meeting that the Chair states at the start, “I would like to remind everyone present that this meeting will be broadcast live to the internet and will be capable of repeated viewing.”, as well as signs up inside and outside the meeting room for the public meeting stating,

Please note: this meeting may be filmed for live or subsequent broadcast via the internet – at the start of the meeting the Civic Mayor / Chair will confirm if all or part of the meeting is being filmed. You should be aware that the Council is a Data Controller under the Data Protection Act. Data collected during this webcast will be retained in accordance with the Council’s published policy. Public seating areas will not be filmed by the council. Contact Officer: Civic and Committee Services Manager – 0151 6918559”

The changes proposed to be added to the public filming the meeting include, “A designated area shall be set aside for members of the press/public who wish to film or secure a sound recording of the Council’s public meetings. Any disruptive behaviour or distractions will result in the person(s) being asked to leave the meeting.

So does this mean I can’t clap, smile, frown, sneeze, cough, change batteries, zoom or pan as this may be deemed a “distraction” and I’ll be possibly asked to leave before I even had time to turn off the camera? And if I answer no thank you, would that be used as further evidence of a distraction and then I’d be forced to leave?

If one person filming a meeting is classed as distracting, then councillors and officers need to learn to concentrate better without getting distracted by distractions!

As if to prove my point, here is their sample text for agendas!

Everyone is welcome to record meetings of the Council and its Committees using whatever, non-disruptive, methods you think are suitable. If you have any questions about this please contact Democratic Services (members of the press please contact the Press Office). Please note that the Chair of the meeting has the discretion to halt any recording for a number of reasons including disruption caused by the filming or the nature of the business being conducted. Persons making recordings are requested not to put undue restrictions on the material produced so that it can be reused and edited by all local people and organisations on a non-commercial basis.“

Wirral Council hasn’t consulted with myself on the proposed changes to its filming policy. The Chair can stop Wirral Council filming if he or she wishes, but if the meeting is open to the public they have no legal powers to stop filming and would just rely on goodwill!

If you ’d like to express your views on this proposed policy before the Standards and Constitutional Committee meets on the 27th February 2018, email contact details for the 9 councillors who are on it are below.


If you click on any of the buttons below, you’ll be doing me a favour by sharing this article with other people.

At Wirral Council’s Budget meeting in March 2017, included in Labour‘s budget was £225,000 for a webcasting/audio/electronic voting replacement described as “webcasting for committee meetings”.

At the time, the Liberal Democrats opposed this. They stated in their Budget that they believed “that this item should be withdrawn until the costs have been fully investigated and the benefits have been fully assessed and justified.”

In August Wirral Council published two notices in the Official Journal of the European Union. The first notice was published on 23rd August 2017, followed by a change to accept variants. By this point the price had gone up to £275,000 (excluding VAT).

Wirral Council came up with a webcasting Invitation To Tender which asks for the submission of tenders by 12 noon on the 20th September 2017.

11.9.17 ED: Since this article was published, Wirral Council have extended the date for the submission of tenders to noon on the 4th October 2017.

25.9.17 ED: Since this article was published, Wirral Council have extended the date again for the submission of tenders to noon on the 3rd November 2017.

In Wirral Council’s invitation to tender it states, “it must also be fully compatible with the Mod Gov case management solution: http://www.moderngov.co.uk/.

According to the technical information on the Mod Gov case management solution, Public-i and Media on Demand are the only two video webcasting solutions integrated to it.

The contract also requests an electronic voting system for public meetings of all Wirral Council councillors in the Council Chamber. In response to a question, Wirral Council stated that the current system of counting votes by which councillors had their hands up was “unreliable”.

If Wirral Council accepts one of the bids, the contract is expected to start on April 1st 2018 and run for three years.